solvation free energy with couple-intramol set to no

proposed fix for redmine bug #3403
Fixes #3403 by preventing the free energy kernel from skipping pairs
that are beyond the cutoff but also in the exclusion list generated by
couple-intramol=no. Forces calculation of the reciprocal-space Ewald
component for those pairs in the free energy kernel. Also extends the
size of the relevant tables to rcoulomb+tabext to avoid getting nonsense
energies/forces beyond the cutoff. Molecules being decoupled in this way
should be smaller than rcoulomb+tabext.

A check for perturbed listed pairs beyond rlist

Also added PME grid correction for LJ excluded pairs beyond rvdw,
which was missing from #3403.

Added missing release note for the fix of #3403.

#1 Updated by Vytautas Gapsys 11 months ago

A possible issue when calculating solvation free energies and using the option: couple-intramol = no

The observation is that the overall electrostatic energy (and, in turn, the final free energy) depend on the rcoulomb cutoff, in spite of using PME.

Attached are the examples illustrating the issue. The system contains a solvated ligand. All, except for two charges in the system are set to 0.0. The two atoms on the molecule which is being decoupled via the .mdp settings have charges of +1 and -1. The distance between these atoms is 0.74 nm. Several scenarious to illustrate the issue are shown where overall electrostatic energy is calculated at the first MD step:

Such a dependence on rcoulomb is problematic, as tunepme can change rcoulomb value during runtime.

#2 Updated by Vytautas Gapsys 11 months ago

#3 Updated by Berk Hess 11 months ago

This indeed seems to be an issue. The radius of the molecule should be smaller than the cut-off radius. We should document this and ideally also add a check for this.
Note that PME tuning is not an issue. This can only increase the cut-off, so never causes issues.

#4 Updated by Yuriy Khalak 10 months ago

I managed to trace the problem to the free energy kernel not applying the long range part of the potential for pairs that are in the exclusion list (as part of the molecule being decoupled) and beyond the Coulombic cutoff.

Attached is a diff against gromacs 2019.4 that fixes this behavior by:

Do note that this moves the problem from applying to molecules larger than rcoulomb to those larger than rlist + table-extension. Ideally grompp should give a warning if this is about to occur. However, table-extension can be tuned from the mdp file without affecting performance by much.

For a system of 6593 atoms, 40 of which are being decoupled, this fix leads to a performance loss of ~5%, so there is room for optimization.

#5 Updated by Berk Hess 10 months ago

What do you mean with adding long-range interactions for those pairs?

#6 Updated by Yuriy Khalak 10 months ago

I meant the need to subtract (not add) the "reciprocal-space Ewald component" to interactions within the decoupled molecule that are beyond the cutoff. This is already done for all interactions within cutoff here: https://github.com/gromacs/gromacs/blob/328a18d71dda42ca67edf76b2f93781dab6fdf9d/src/gromacs/gmxlib/nonbonded/nb_free_energy.cpp#L783-L820

As those interactions are on the exclusion list due to couple-intramol = no, they ignore cutoff in https://github.com/gromacs/gromacs/blob/328a18d71dda42ca67edf76b2f93781dab6fdf9d/src/gromacs/listed-forces/pairs.cpp#L96-L143 and get a 1/r potential there.

So what ends up happening to short range (PME LR not considered) interactions is: 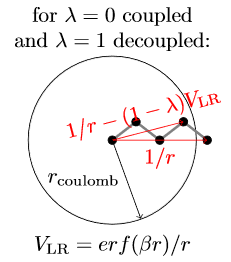 #7 Updated by Vytautas Gapsys 10 months ago

Could you explain a little more why table-extension does nothing?

In the attached examples I used gmx release-2020. In one case in the .mdp I set table-extension=1 (table1.tar.gz), in another case table-extension=5 (table5.tar.gz). Verlet cutoff scheme is used in both cases. For the shorter table extension I get warnings like this one:

"WARNING: Listed nonbonded interaction between particles 99 and 361
at distance 2.517 which is larger than the table limit 2.441 nm.

This is likely either a 1,4 interaction, or a listed interaction inside
a smaller molecule you are decoupling during a free energy calculation.
Since interactions at distances beyond the table cannot be computed,
they are skipped until they are inside the table limit again. You will
only see this message once, even if it occurs for several interactions."

#8 Updated by Anonymous 9 months ago

#9 Updated by Berk Hess about 2 months ago